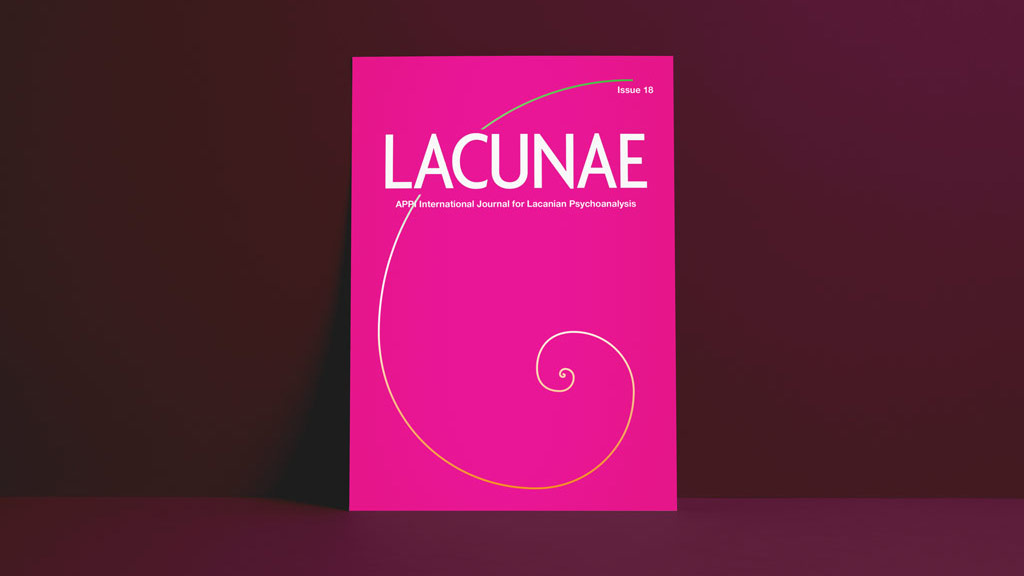 If there is one word that might capture this edition, it is “diverse.” This issue features a range of articles from areas such as cultural theory, social science, philosophy, literature, politics, religion and the virtual world—all filtered through the lens of Freudian-Lacanian psychoanalysis and reflecting aspects of the big Other today in its complexity and changeability. Each of these articles invites the reader to engage critically with them and poses questions about psychoanalysis and its role in contemporary life and psychic health, each making the case for the essential role of psychoanalysis and the place of the unconscious in supporting the contemporary subject now more than ever.

In November 2018, the APPI Annual Congress organisers dedicated the event to exploring Rob Weatherill’s recent book, The Anti-Oedipus Complex (2017), and a number of articles which responded to the book at the congress are captured here. For decades, Rob has been one of Ireland’s most prolific writers in psychoanalysis and has taught generations of graduates, impressing them with his knowledge of different psychoanalytic approaches, philosophy, cultural and critical theory. In the 1990’s, Rob was one of the founding members of APPI which has now grown significantly since its inception. This issue is delighted to celebrate and recognise Rob’s work and his contribution to psychoanalysis and to APPI, then and now.

In “Where Have All the Fathers Gone?” Rob does not hold back in assessing the state of fathers and fatherhood today in contemporary life. He writes unsparingly and incisively about the decline of fathers as a cross-cultural phenomenon and the impact over the last decades of the decline of the big Other for the subject. Subjects struggle to gain a foothold in a symbolic less supported by traditional forms of symbolic authority that invest fathers with the insignia of fatherhood, which has traditionally conveyed an authority-bearing repressive function. The decline of fathers in today’s “atomistic” “postOedipal” world supports what Rob pessimistically calls a “universe of perverted jouissance” and “a clinic of the death drive,” long of course predicted by Lacan himself. But after decades of work and thought, Rob does not conclude pessimistically on the role of psychoanalysis. Quite the opposite in fact, as it is possible to read in his assertions and analyses, a beckoning to psychoanalysis to re-double its efforts in facilitating the assumption of our “history in responsibility (to the other)…[and] witnessing, on the edge of strangeness, meaninglessness and death, in the manner of a vigil, fully awake…”

Dorothée Bonnigal-Katz, in “Post-Modern Psychoanalysis, Anti-Oedipus and Psychosis,” applauds Rob work as an endeavour to recoup and emphasise the radical negativity of the unconscious. Commenting on the loss of this radical negativity, which she links to writers such as Deleuze and Guttari who seek to de-Oedipalise or schizophrenize the unconscious, and to theorise it from the real, she reminds Lacanians that while the unconscious may not be present in psychosis, psychoanalysts work with it anyway. Not only that, but she considers, most interestingly, the difference between the paternal and patriarchy, especially important in an era of the increasing transformation of individual hate into “mass psychosis” and tyrannies of ideal egos.

In “Politics, Heretics, and Oedipus Today,” Rik Loose responds to Rob’s book via Lacan’s aphoristic “the unconscious is politics” by querying whether the book seeks to make the Other which doesn’t exist, exist. As a mode of “heresy,” Lacanian psychoanalysis positions itself, following Lacan, as heretical to the contemporary pursuit of jouissance that ends up as orthodox and mass-produced. His comments about contemporary politics, culture and the state of contemporary psychoanalysis are thought-provoking and utilise The Anti-Oedipus Complex as a foil for thinking about the importance of heresy and orthodoxy.

Alan Corcoran, in “Oh Father! What Father? A Response to Rob Weatherill’s The Anti-Oedipus Complex,” employs The AntiOedipus Complex to assess culture and sexual politics and provide a cultural analysis of the implications of sexual liberation in Ireland and internationally, especially for sexual minorities. His deconstruction of the big Other contextualises “the unconscious is politics” by hinting at the master signifiers that have dominated sexual relations over the last fifty years. He calls for re-assessing notions of “man,” “masculinity” and “fatherhood” in light of their historical significance and recent changes, set against the cruelty and suffering of those who did not conform to traditional tropes of men and masculinity. He poses the Oedipus complex as being far from dead and gone.

In “A Short Digression on the Meaning of Knowledge,” Dan Collins takes up the well-known philosophical epistemological ideal of knowledge known as “justified true belief” (JTB) from Plato to Gethier to Popper, and shows how this can be deliberated on from a psychoanalytical perspective. This adds to JTB the dimension of grammar as well as Lacan’s crucial notion of jouissance, and explains the importance of transference, the symptom and jouissance in knowledge. Knowledge and jouissance are linked initially by Freud who emphasised how individual knowledge is c r e a t e d and also how non-objectively it is worked with in psychoanalysis, and later by Lacan in his notion of the sinthome which, as enjoyed belief, does not involve objective truth.

Hilda Fernandez-Alvarez, in the tantalisingly entitled, “Will a Cyborg Steal my Jouissance: Unconscious Labour and the Enjoying Body of the Virtual,” calls attention to the virtual world’s commodification of the human body in co-producing a space between the human and the virtual, a mediation of human experience akin to Lacan’s notion of “lathouse.” Her article examines how we enjoy, what is permitted, and how the big Other conditions what we desire and enjoy increasingly via virtual technologies and cybernetics. She also makes room for the unconscious and the enjoying materiality of the body as that which is excessive to artificial technologies. Using Jon Rafman’s artwork on dreams, she argues this mimics the unconscious labour at work in Freud’s technique.

Laura Tarafás takes on the important theme of radicalisation in her article, “One of the Worst Things you can Do to a Person Who is Becoming Radicalized is Reject their Words”: Towards a Complex Psychoanalytic Understanding of Islamic Radicalisation.” A new contributor to the journal, she plunges into the perplexing and frightening world of youth radicalisation and argues for the importance of psychoanalytic analysis in advancing understanding of this increasingly worrying area. Drawing from her work and her use of contemporary sources, she connects the process of radicalisation to addiction and opens up this area to the readership in ways that will, no doubt, provoke their thinking.

The issue’s book review is conducted by Carol Owens who reviews Trauma and Race: A Lacanian Study of African American Racial Identity (2016) by Sheldon George. The review draws out the significance of the book in assessing race relations and the dynamics of racial hatred in the USA and what a Lacanian analysis brings, anew, to such an assessment. As well as exploring the work of Toni Morrison and Ralph Ellison, the book considers how the signifier “race” links black Americans to a jouissance of slavery and leads white Americans to perversely embrace transgressive fantasies; the role of contemporary Oedipus; and how “race” is utilised as a signifier of “jouissance” and “jealouissance” by dominant white culture. Sounds like a must-read.

These articles all make jouissance a principal area of focus.

I leave you to enjoy the writings ahead.